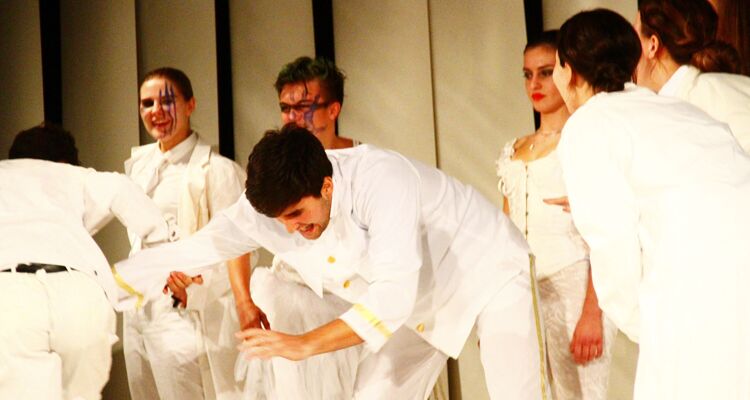 Something Wicked this Way Comes

On Monday 10th October, Chiswick had its first of a trio of shows with a dark/gothic theme.

The music department kicked off proceedings with a wonderfully eclectic mix of music, all rehearsed over the first five weeks of term.

The Orchestra opened with Bach's famous Toccata and Fugue in D minor. This is incredibly tricky for a school orchestra to pull off, but our musicians rose to the challenge and played with great technical flair.

We then had three choral works: two movements from Faure's requiem, including solos by Zach Thornton and Josephine Smith, and then Chiswick Voices sang the haunting Coventry Carol. We sang the original manuscript version from 1591 which still contains many of the great renaissance thumbprints.

The Steel Band closed the first half. It was a particular highlight to see so many new Year 7s in the band, and there were so many performing that students had to sub in and out halfway through the song.

We reset the stage for the second half for our bands and choirs. Chiswick Voices made a real impression with the relentlessly fun Minnie the Moocher, with the energetic soloist Emma Parkinson beckoning the audience to join in. We then had Orla Scott, Junior Singer of the Year from last year, sing 'Screw Loose' from the musical Cry Baby.

It was then time for the bands. Dark Riders, our new Year 7 band have only been together for 5 weeks, but they pulled off a brilliant rendition of Thriller (not an easy song for a Year 7 band!). We all look forward to seeing how they grow in years to come. Afterwards we had Blue Monday perform three very dark songs in the form of Brand New City, Little Dark Age, and Tainted Love, and we finished with Xing and the Backups closing the show with brilliant renditions of Hunger for a Way Out, Love Will Tear Us Apart Again, and the ever-popular Babooshka by Kate Bush. Mr. Moxon's eardrums almost burst at the end because of the sheer amount of screaming from pupils watching!

We have plenty more shows to come this term (the current count is five), and we look forward to welcoming more and more students into Music, Dance and Drama.

The Performing Arts had their first performance of the year with a song and dance evening 7SINS. The evening started with a sing along to some popular "Halloween classics" including Monster Mash, The Time Warp and I'll Be Your Dentist (from Little Shop of Horrors) The audience took to their feet and danced to the left... and then stepped to the right! After a short interval, with drinks provided by our PTA, the dance show began. The students performed eight dances in total which reflected the seven deadly sins. First up was a visiting dance crew from Bolder Academy with an opening number "It's Sinful". The students then went through Lust, Envy, Gluttony, Sloth, Wrath, Greed and finally Pride. Pride was a compilation of all the dances the students have completed over the past few years, with a film depicting the journey, showing their own personal pride at being part of Performing Arts. The first audience of the year for us, made up of a lot of parents who are new to performing arts, due to the large number of new Year 7s taking part, were amazed not just at the quality, but also the speed in which the production was put on.

The third show of the week was presented by our new Year 12 BTEC Performing Arts group - Titus Andronicus. The play is seen as one of Shakespeare's more difficult, mostly because of the number of technical aspects, due to the large amount of on-stage murder and depictions of graphic violence. The group had been rehearsing intensively for four weeks to prepare this difficult and exhausting physical piece. Most of the play was ensemble with all the actors on stage. All characters drove the story relentlessly, with the power that is needed to make it work. Screams, death and blood inhabited the stage. The combination of film, music and acting made for an amazing performance. At the end of the show a shocked and dazed audience gave a well-deserved standing ovation.

The Steel Band have been as busy as ever over half term and had two incredibly successful concerts to hundreds of people in West London.

On 26th October the band went to Heathrow Airport for a day with British Airways. The band were given an exclusive tour around the British Airways Headquarters, and were lucky enough to have Q&A with the staff about life in the airline industry.

But this tour, as good as it was, was only ever going to be a warmup for the main event. The band then travelled over in their own private coach right to the doorstep of Heathrow Terminal 5, where we swiftly unloaded 20 large steel pans and took them to the main concourse. We set up to the bemusement of some onlookers, curious as to what was going on, and then got straight to playing a set including songs by Justin Timberlake, Imagine Dragons and Ed Sheeran. Suddenly scores of anxious holidaymakers turned their heads with smiles to hear what was going on. By the end, there was quite the crowd of people coming to watch. British Airways were very grateful for our coming, and we hope that this will be the start of a long partnership between the two leading institutions of West London: BA and Chiswick School.

But that wasn't all. On the first day back after half term, the Steel Band also made the short trip to Grove Park Primary School to play for their Black History Month Assembly. They filled up the entire front of the Assembly Hall, and received a very excitable welcome from the children.

On Tuesday 11th October our Year 10 music students went to the Royal College of Music to watch a mesmerising day of performances.

We started by attending a piano masterclass by the world-famous pianist Angela Hewitt. She is particularly famed for her recordings of Bach and her discussion and performances of Bach's keyboard works were captivating for all of us. In the masterclass, she publicly coached to student pianists, and her insight into performance practice and interpretation were an inspiration.

Afterwards we went to the RCM's very own museum, where we looked at historical instruments, original manuscripts, and paintings of famous composers. We discovered items such as a classical contrabassoon, a 16th century keyboard, and a lute with 20 strings.

We ended the day with a lunchtime concert given by undergraduates at the college. This was highly entertaining, and the highlight was certainly a guitar and flute duo playing a piece that traced the history of the tango.

This is the second music trip of the year in just the first 6 weeks, and we look forward to many more this year.

As part of the school's "enrichment day" that was postponed from last academic year, some of our Performing Arts students were delighted to be invited to Pineapple Dance Studios for two workshops with professional dancers.

We started the day with a bit of historical culture with a visit to the Victoria and Albert Museum. The students wandered around, took photos and were amazed by the cast room in particular.

Then we travelled to the Pineapple Studios for our workshops.

The group were split into two, with one group participating in a contemporary lyric dance workshop and the other an intense modern dance session.

Both groups were put through their paces and worked extremely hard to impress the instructors, who were all genuinely surprised at their stamina and skill. By the end of the day all the students were uncharacteristically quiet!

Since the building work at school has been completed we were left with a blank and somewhat grubby wall by the 6th form/art block.

Over the summer holidays, Mr Robinson and some students decided to decorate it with a new mural.

The mural is a depiction of the school, showing all the different subject areas of the school and an image of a young girl wearing a Hijab. Included in the composition are our "beloved" seagulls.

It took just over a week of hard work to paint... but only it to be washed away one evening in a rainstorm!

Undeterred, Mr Robinson returned and "fixed" the painting to its current glory.

The wall is now the fifth one to be painted and we are already on the hunt for the next!

All this term we have been delighted to welcome the Oti Mabuse Dance Studio to run workshops with our students. The students from Years 7 - 12 have been put through their paces with ballroom dancing (delivered by Oti's husband and fellow Strictly dancer, Marius Lepure), musical theatre and street dancing. The program lasted for the whole term, with three groups taking one hour each, as well as rehearsing in their own time. All the professional dancers have been incredibly impressed by the dedication and resilience of the students, as well as the support the Performing Arts gets from the school

The students will be showing the work they have done in November, and parents will of course be invited.

Before the summer holidays, a number of students were involved in the design and research for a new indigenous people garden. The group visited museums, hosted visitors - from puppet masters to musicians - and were taught the importance of indigenous peoples' planting, especially medicinal and edible.

At the start of the summer holidays Mr Robinson and a number of students dug holes, painted benches and planted tomatoes, strawberries, herbs and shrubs.

The project, sponsored by Border Crossings, Kew Gardens and the Lottery Heritage Fund was completed by a large wall sculpture of a Sun God, who has been left to watch over the garden.

The Sun God certainly did his work over the first few weeks as we had no rain. This resulted in many visits to the school, with watering cans and buckets to keep the garden alive.

By the return of school the garden had flourished, and we now have our first crop of tomatoes!

We will be officially opening the garden at the end of November with an evening of speeches, song and dance.