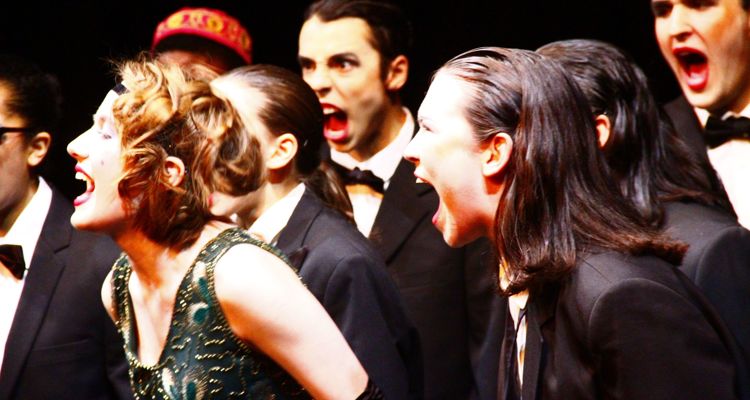 This year we returned to the Shakespeare Schools Festival, after a year’s absence. We performed our version of The Merchant of Venice, “Merchant”.

The play has recently come under much criticism for its implied themes, and isn’t performed much as a result. However we decided to perform the play to draw attention to the issues raised in the play, and shine a light on discrimination and prejudice.

We set the play in 1930s Munich, as the start of the Weimar Republic, taking stylistic influences from Brecht, Kurt Weil and German Cabaret. We only had a short 5 weeks to rehearse, spending most of our weekends in school. After hard rehearsals, trying to make sense of the difficult narrative and adjusted context, we were ready.

Then we had the bad news that two of our cast had to isolate, this was with only three days to go! Fortunately for us we had a number of very talented students who could step in and “save the day”.

The cast worked extra hard to pull it all together, so by the performance day we were ready!

We made our way to the theatre in Twickenham, put on our costumes and make-up and spent the rest of the day preparing for the show itself.

The performance was amazing!

The students really understood the creative direction of the play, and performed as a dark and sinister cast. With faces whitened and eyes darkened, they sneered through the text creating an atmosphere that enhanced the main theme of prejudice and revenge.

The main cast performed exceptionally well, the two main male characters of Antonio and Bassanio, played well together. One with aggression and violence, the other with arrogance and contempt.

Portia was played as a vain and self-centred spoiled woman, who knows she has every man in the palm of her hand. Shylock was played as a younger man, who is by now frustrated and angry at the way he is being treated, and relishes the opportunity to get his own back.

The play was punctuated with songs from German productions from the '30s, and ended with a quietly sung version of “Tomorrow Belongs To Me”.

However the biggest shock of all was our ending. In the play the final two scenes are seen as a comedy of errors, with a ring being passed around and a man revealing herself as a woman.

This comes after a court scene where Shylock, and his family, are humiliated and forced to give up their faith.

I decided it would have been a mistake to perform the play like this, as it gives credence to the decision of the court. So we decided to collapse the end and show the violence dished out to those of Jewish faith at the time our play was set (Germany 1930s) and also remind the audience that this has been happening for hundreds of years.

In the end this was our message. Shakespeare wrote in a different world to us, one that we no longer live in. It was important therefore to show this world as it was, but also to remind the audience not to ignore the injustice of it.

We will be performing Merchant at school on the 16th March, to give the chance for those who missed it, at 6:30pm in the main hall.