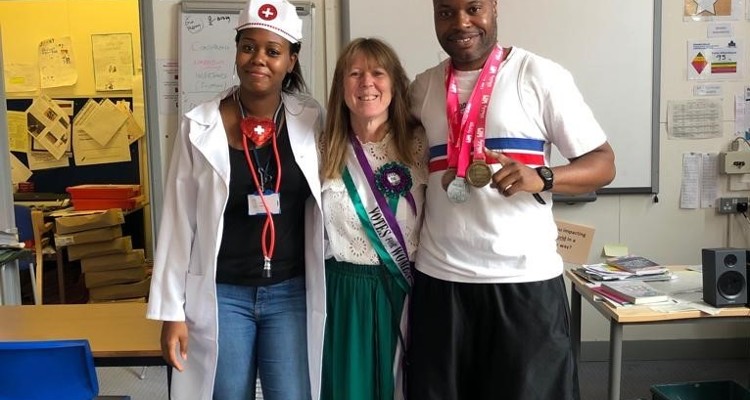 Thanks to the proactivity of our school council, the idea of a ‘Hero and Heroine Day’ came about. This was a day that every member of the school community could participate in and it resulted in an inspiring, enriching experience for all.

On Monday 15th July, Chiswick School launched ‘Heroes and Heroines Day’ where all lessons were based on the theme. Teachers focused their lessons on inspirational people such as Chimamanda Ngozi Adichie, Stephen Wiltshire and Keith Haring. Staff also told personal stories about inspirational members of their families.

Pupils decided to tie the day into a fundraising event which involved every pupil bringing in tins of food for the local foodbank. Early in the morning the PSHCE classrooms were busy with pupils making donations of tins for the Hounslow Community FoodBox. Later on in the day the Year 8s were privileged to hear a talk from Oonah Lacey and Teresa who help manage the foodbank in Brentford.

We were also delighted to welcome Joshua Byworth from Hammersmith and Fulham ‘MIND’ who delivered a insightful talk to pupils about the world of mental health. He also took the opportunity to thank our Year 9 Form representatives who had raised £900 for MIND earlier in the term.

A group of Year 10 historians were fortunate to hear a talk from a local resident, Pat Davies. For three years during the second world war she intercepted German messages from naval traffic and passed them on to codebreakers at Bletchley Park. The pupils were mesmerised by her story and quite thrilled to meet a 91 year old who had lived through the period they study in textbooks.

A group of Year 9 enthusiastic scientists listened to Caroline Richardson, a consultant breast surgeon at the New Victoria Hospital in Kingston. They were interested to hear about her career which encouraged them to think about their own next steps.

Our trusted community Police Officer, PC Adam Justice addressed the Year 7s on the work of the police and the work they do on a daily basis to keep people safe. Although others may see it as heroic acts, they feel they are simply doing their job.

Dan Scarlett also brought two of his team from the London Fire Brigade who are some of the unsung heroes in our community. Although they admitted to sometimes feeling fearful before entering a burning building, they do not hesitate in their job. The pupils appreciated their frank and thought-provoking presentation. Likewise Keith Plummer from the London Ambulance service gave a moving story of how he had once rescued a man and saved his life only to discover he was a NF, neo-Nazi supporter. As a black man this was an unpleasant twist but Keith agreed he would do it again as he would not falter in his mission to save lives.

Barrie Griffiths from ‘Help for Heroes’ gave a moving talk to the PSHCE classes about his personal hero, Mark Ormond, who was hurt whilst with the marines. He became the first ever triple amputee in the UK. Barrie described how Mark’s attitude and ability to turn adversity into a source of positivity was quite remarkable.

Parents were also invited to join the day and it was wonderful to listen to their soul-stirring stories which were told with passion. Sophie Robinson gave a talk on a documentary she made on the remarkable Jess Thom who suffers from Tourette’s syndrome. It was a very poignant talk which gave the pupils a clear understanding of the condition. Carrie Reichardt has long championed the cause of death row inmates in America. She gave a presentation about the ‘Angola 3’ who were held in prison for over 40 years and for many years in solitary confinement. Halfway through the talk, Yusuf in Year 7 put his hand up just because he wanted to tell Carrie he thought she was a very good person. Imogen Tranchell gave a speech on Berta Caceres, a Honduran indigenous leader and activist who was sadly assassinated but inspired generations.

During the lunchtime, form representatives also ran stalls to raise further money for charity, raising £176 in just half an hour! This, and the money raised from pupils wearing costumes, will go towards the charities who attended on the day.

Andrea Kitteringham, Head of PSHCE said “To everyone who dressed so brilliantly, who spoke so profoundly and helped out so supportively- thank you for your heroic efforts.”

Laura Ellener, Headteacher said “It was excellent to see so many children dressed up as their hero or heroine. The school was full of suffragettes, inventors, historical figures and a few England cricket players as well. Staff delivered inspiring lessons and the students loved hearing from local people.”