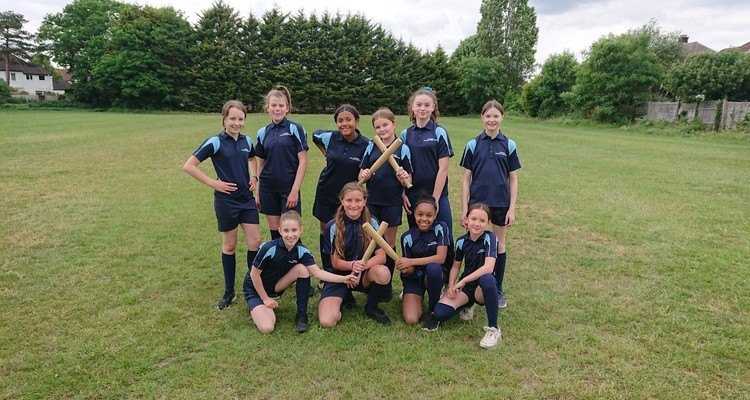 The Year 7 Rounders team have gone from strength to strength this term winning all three of their matches against other schools within the borough. The first game against Lampton proved a challenge as it was the first chance the girls have had to put their skills to the test. After the first innings the scores were close and seemingly the final part of the game would be a difficult one. However with excellent batting and some wonderful fielding decisions the girls sailed through the final innings winning 16 to 11 and a half rounders.

Next up was Bolder Academy, our first away game of the season. Although this is usually a daunting factor the girls did not let it rain on their success, Bolder were a tough opponent and kept the scores very close throughout. Despite this the girls pulled off a 20-19 rounder win. Special mention to Rosie V and Nelli H for their excellent batting skills which on a number of occasions scored us a full rounder.

Our most recent game, this time back home on Chiswick ground we faced Reach Academy, the girls tactical play and strong communication skills proved difficult for Reach. The girls again worked hard throughout their game and came away with yet another win.

Our rounders tournament was held at Heston School this year, thankfully the weather was in our favour and we managed to get stuck in, the girls played really well in the first round of matches, winning their games to reach the semi-finals. Unfortunately it was not our day and we faced defeat against Lampton - the girls should be proud of all of the hard work that they have put into training and matches this year. Well done! Thank you to Mr Hird for taking the girls to the rally.