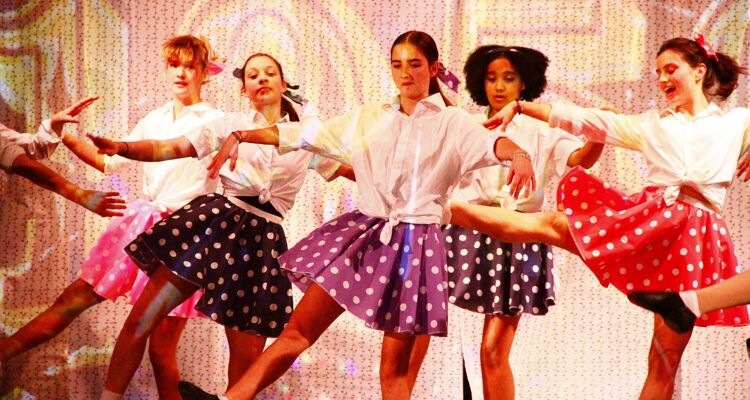 On a very frosty Sunday at the start of December we donned our best (and worst) Christmas costumes and headed off to Chiswick Flower Market to sing a selection of Christmas classics. We had two spots, one at the start of the day, and then another at the very end. We sang and danced and waved our arms about with enough energy to warm the entire market! The ever growing audience sang along with us, and enjoyed every moment. The whole of Chiswick High Street was filled with our own special brand of Christmas cheer.

Since June of this year we have been developing and building a new garden, specifically with a group of Year 8s and 9s. The garden, which replaced an unsightly patch of grass by the canteen has really brought a splash of colour, and the students who created it have really made a massive impact on the school, and they should be extraordinarily proud of this. In November we had our official opening of the garden, hosted by Border Crossings and the Botany Bay Project. The opening ceremony included a special dance, choreographed by a visiting indigenous Bolivian dancer, music specially composed and performed by a group of Year 7 and 8 musicians lead by a Peruvian musician, a song performed by our 6th Form Performing Arts students and speeches lead by our Year 9 students.

The ceremony ended with a blessing by a visiting Shaman. The evening was a great success with all the students, who had been rehearsing in their own time.

The garden will now be here for the foreseeable future, and will be a reminder of just how the students, in particular theYear 8 and 9s, made a positive difference to the school environment, while learning about indigenous planting and doing what they do best, performing and creating great art.

Outside the old police station is an old ginkgo tree, which is in desperate need of Christmas decorations.

So Abundance London, the organisers of Chiswick Flower Market, asked us to design and create some baubles that could be hung from the tree, be internally illuminated and withstand the unpredictable British weather.

So we got to work on 20 large papier mache baubles, decorated with lighting gel and glitter.

The balls took us about 3 weeks to construct during breaks and after school, and were by the end solid and colourful.

The baubles were attached to the tree, high up, and lights were put inside. In the dark they shine and flash colour around the area and in the day they shimmer.

The balls will be up until the new year, and so far have outlasted the unpredictable British weather.

In what has become an annual event, we invited our local primary schools to watch our Pantomime.

The panto, performed by our Year 10 Performing Arts students, was a mix of Little Red Riding Hood, Snow White, The Three Little Pigs and randomly 2 Ninjas. As always the audience from Belmont and Cavendish primaries were excited and very loud, and shouted over and over again "it's behind you!"

Already the schools are looking forward to coming back next year.

The Lion, The Witch and The Wardrobe

Our interpretation of The Lion, The Witch and The Wardrobe was billed as being "interesting"... and it was. Mr Robinson, who wrote the play, has a history of ignoring a classic narrative, with his productions of Alice and The Grinch, and The Lion, The Witch and The Wardrobe was no exception. The play started normally, with children dressed as 1940s refugee children looking for a place to stay, the four children - Peter, Susan, Edmund and Lucy - were all taken in by the kindly professor. Lucy then found the wardrobe, entered, and this is where it went "wrong".

The premise of our production is that no one in Narnia thinks any of this is real, and they all believe that the four children are just idiots. The play was splattered with references to previous productions with guest appearances by Bill Sykes (who played Santa) and Oliver who tried to get on the stage, only to be told to leave. At one point the White Rabbit from Alice arrived, realised her mistake, so left. The play was a chaotic mess of set changes, children randomly singing, an inflatable lion costume and a giant chicken. Highlights of the show included having to phone the parents of the actors on stage to report that they had been accidently killed. In the end Lucy finally realised that the whole thing is a farce and goes on a rampage, finally shouting at Mr Robinson for getting it all wrong.

The audience laughed throughout at the mayhem, and to be honest were as confused as C.S. Lewis would have been.

For six weeks our students worked with the Oti Mabuse dance crew to put together a short performance of dance. The evening was a mix of ballroom, musical theatre and lyrical dance.

Over 30 students from across all years participated in the evening, and after only seven rehearsals put on an amazing show. In total they performed six dances, three of which they worked with the visiting choreographers, and three that we had pre prepared. The audience were amazed at just how much we had achieved in such a short amount of time, however for us this has become the norm!

Once again we are extraordinarily proud to announce our shortlisting for Outstanding Drama Department at the National Drama and Music in Education Awards 2023. The awards are the pinnacle of the drama education calendar and it is an honour just to be nominated. In addition to the department nomination, our Head of Performing Arts, Mr Robinson, has also been nominated for the Drama Inspiration Award. The ceremony will be in January, so "break a leg".

Our Performing Arts students were to perform a Christmas Carol as a dance at the end of December, so when the opportunity arose to watch a one man play of the book at the Tabard Theatre, we gleefully accepted. The Tabard Theatre arranged a special rate for us and 35 students, plus a few parents, all packed into the theatre.

The show was really good, and the students really appreciated the skill of the actor to portray all the characters in the story. It was a really good introduction to the play, and a timely reminder of the narrative for the students.

Our second big dance show of the year was an adaptation of A Christmas Carol, choreographed by our dance teacher, Miss Knight, with music by Thomas Newman, rearranged by Mr Robinson. The story was told as a series of dance vignettes with a clock motif being used as a transition between time periods. The cast danced perfectly and really got the emotion and sometimes fear into the proceedings. The final dance between Scrooge and his lost love was touching and moving, and brought to an end a dance which really showed off the talent of our students. In the second half we performed dances to Christmas number ones from each decade, from the 50s, right up to modern day. We were lucky to be joined by the dancers from Belmont Primary School who performed an energetic version of Merry Christmas, Everyone from the 80s. All the dance groups were received really well, and everyone agreed that the show really encapsulated the Christmas spirit.