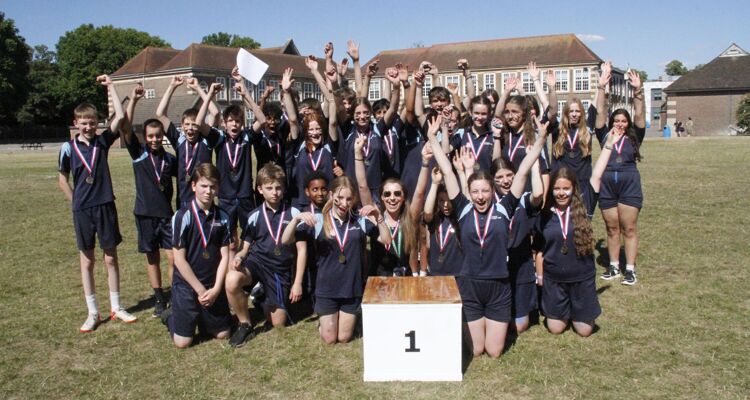 On Friday 8th June, Chiswick held their annual Sports Day. Like every Sports Day the weather was hot, but this didn’t impact the intensity of the event.

In the morning session, we were entertained by the Year 9 and 10s competition. As this group have already experienced a number of sports days they knew what was at stake. We saw some fantastic competitors in the field and track events. All pupils respected each other and helped encourage their peers through the events (especially during the gruelling 800m race). Obviously everyone was a winner, but there had to be one form from each year crowned Sports Day Champions.

In Year 9 this honour went to Grove and in Year 10 is was Fielding who came out on top.

Whilst we awaited the results, it was the turn of the staff to show their athleticism in the relay. It was a chance to see which year group team from year 9, 10, 11, and 6th Form were the quickest. After some controversy it was Mr Gill's Year 10 team that claimed 1st place.

In the afternoon session the excitement level was off the charts. This was the first Sports Day for Year 7s (though you wouldn’t have thought it). The Year 8s were also in action. Like the morning, the pupils showed great sportsmanship and enthusiasm. They competed well and respected each other. They showed maturity levels beyond their age. They demonstrated great skills in both field and track events.

The overall winners in Year 7 were Grove, and in Year 8 it was Chatworth who came out champions.

Again, whilst the results were being calculated it was the Year 7 and 8 teams that competed against each over in the relay, and as always it was Mr Chavda’s Year 8 team claiming the gold medal.

The PE department would like to thank all the pupils for an amazing day, and thank all the staff who organised and motivated their teams, and led events.

On Wednesday 6th July, the PE department celebrated all the pupils who have attended extra curricular clubs, been sports leaders and represented the school in competition.

This year it was fantastic to see the devotion the pupils had shown towards the many clubs this school has to offer, and the PE department would like to thank all the pupils who have supported the extra curricular programme.

The final award was a new award in honour of Ali Abucar Ali. This award goes to a pupil like Ali who has been devoted to extracurricular activities and has represented the school in many activities.

They are passionate about sport and play with respect for their teammates and the opposition. They lead other pupils and motivate them to try their best.

The first pupil to receive this award was Curtis G.