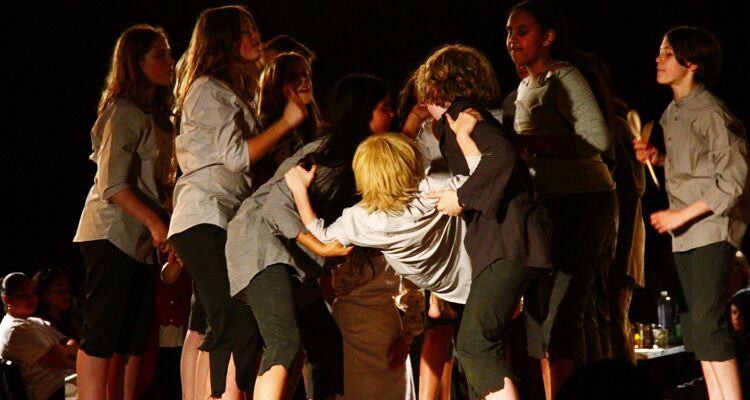 This is the one everyone had been waiting for, and after 10 other productions so far this year, would this be the one leaving everyone wanting more?

During the 7 weeks of full rehearsals the students came in after school and weekends really showing their dedication and commitment to the performing arts. They worked extremely hard and after many tears and tantrums (mostly from the director, Mr Robinson) on the 5th May we we ready!

The stage had been built, in the round with tables set out like a cabaret, and the set hanging from the ceiling of the hall. We had decorated the tables with Victorian knick knacks bought from the PTA car boot sale earlier that week, and set up a bar on the stage.

The students were dressed in "steampunk" inspired costumes, covered in bits of jewellery and watch cogs. Even our pianist Mr Moxon got in on the act dressing in a tatty tail suit and flat cap.

Images were projected onto a transparent plastic which gave the space an eerie, smoggy feel, just like old London.

As the audience entered they were greeted by members of the cast who offered to sell them things and spoke to them as though they were part of the show. This was very much the case, as they were about to find out.

As soon as Food Glorious food kicked in the energy on stage was palpable, the students performed with a mix of childish bravado and excitable nerves.

"Please sir, can I have some more?"

It was clear that the audience did!

The rest of the first act was one amazing act after another. The bumtious and flirtatious widow Corney, the creepy and slightly deranged Sowerberries, the over confident and precocious Dodger, the manipulative and "well being" Fagin, Bet and Nancy with their not so innocent winks and holding it all together the wide eyed and vulnerable Oliver. Each member of the cast gave it their all, and never stopped believing in the world they had created and invited the audience to be part of.

This lead to the whole audience being told to join in with "Umpa Pah" by the very persuasive patrons of the blind beggar.

As the first act drew to an end, Nancy sang a pulled back and poignant version of "as long as he needs me" and the audience who had just danced about to Um Pah pah were made to feel sad for Nancy's plight. As the light came up for their interval, the tissues came out.

The second act was no less exciting and culminated in the shocking and brutal death of Nancy by the hands of a very sinister and imposing Sykes, seen through dim lights and oncoming fog.

His death came almost as a relief!

In the end Oliver was carried through the audience on the shoulders of the cast, to a final rendition of "Consider yourself".

Throughout the show, the audience were dragged off their chairs and made to dance and sing and laugh, and at times cry as the cast weaved their magic among them. No audience member was safe from their infectious energy and mischief, with one poor soul even having their bag stolen, and another repeatedly having their chair taken from them !

That night the cast were indeed stars, but on this occasion, so were the audience.

Due to the generosity of the PTA, and from donations given at this year's performances, we were able to buy new uniforms for the Performing Arts students.

The tops are black polo shirts with the new Chiswick Arts logo and the front and "CHISWICK PERFORMING ARTS" emblazoned on the back.

The students couldn't be more proud to wear them, and bring them to rehearsals every day. It is amazing to see so many of them around the school and is a testament to the journey we have been on.

Our year 9 students are currently participating in a project being delivered by The Lyric Theatre. The project, which runs alongside a new production of "Britannicus", will see our students perform on the stage at the The Lyric on the 10th June.

For the past few week the group have been meeting with two workshop facilitators to start to devise a short production based on the themes of the play, those of jealousy, rage, murder and power. They have been looking at the history of "Britannicus" (surrounding Nero and his family) and reading and adapting some of the script on the 10th June they will be attending the theatre for the day and working with students from other schools. The event will be open to the parents of the students.