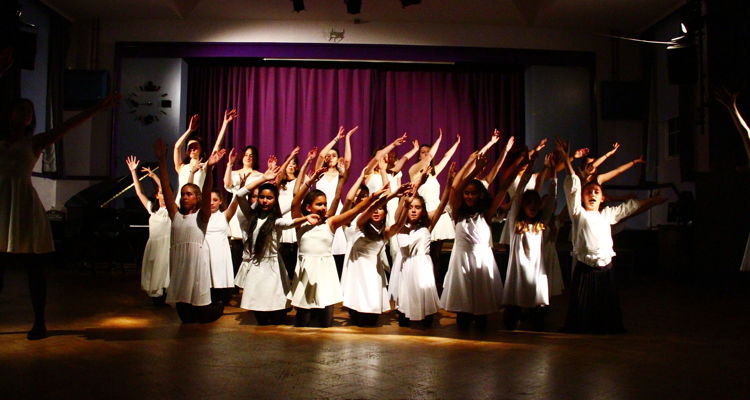 Highlights from The Arts

We were very proud to be invited to the blessing ceremony for the Totem Latamat. The Totem was made in Mexico by an indigenous artist and represents the feelings of his tribe towards the climate crisis. The Totem started its journey to Glasgow for the COP26 conference that has been dominating the national news for the last month. Its first stop was at Chiswick House were we (a group of year 7 students) welcomed it with speeches and music, as well as a blessing from the Mexican Embassy and a Mexican Shaman.

One of the students who took part was Ellie from year 7, and she was asked to write a blog to accompany the journey.

“Hi, I'm Ellie and on Monday, my friends went to Chiswick House to do a speech about the environment. It was really great meeting a representative of the Ambassador of Mexico, the Mayor of Hounslow and seeing the big totem used to spread environmental awareness and peace. Something I found really cool about the totem was the fact that it was carved entirely out of wood! On our way to Chiswick House, some students and I had to carry a massive pole full of information about ourselves, our nationality and much more! On the way there it was pretty tiring due to us carrying the pole. Then, we carried the steelpan instruments to the grass, before doing some pictures for the press. Not so long after that, my friends and I said our speeches and introduced ourselves to the Mexican representative. What’s more, Chiswick School’s steelpan band then played “Levitating” as a welcome to the totem, before we met the Mayor of Hounslow after a song worshipping the totem, from the Shaman. This day was an amazing experience and I loved it.”

Before the national lock down we were asked to design a mural for a new building on Chiswick High Street. The mural will be painted on the hording currently surrounding the redevelopment of Empire house, across from Turnham Green Church.

A design company asked us to provide drawings which represented Chiswick, and they would pick two as “winners”

Two lucky Year 9 students were chosen, and in addition to their work being shown on the wall they also received a national art pass for them and their family, which gives them access to museums and galleries across the UK for free.

The CEO of the redevelopment firm was particularly impressed by the energy and craftsmanship of the drawing and commended us on our talent.

The wall is due to be completed over the Christmas period and be revealed in January.

All this term we have been presenting break time concerts for students and staff to listen to in our new drama studio.

The concerts, which are seen as a way to give students the confidence to perform without the pressure, have been very popular.

We have had singing, guitar, piano and violin. Most of the students are new to performing and a few surprises have left the audience of students and teachers amazed by the talent they never knew existed.

We will be doing break time concerts every week on a Tuesday, rotating between KS3 and KS4/5.

Well over a year ago we started a project with Hogarth House to provide a promotional film.

We were invited back this month to kick start it again. A group of Year 10s, some of whom were in the original group, visited Hogarth House, looked at the pictures and artefacts and spoke to the head of engagement.

What surprised the students most were the similarities between the circumstances of Hogarths, London, and the reality of their own. Many families still struggle with the overcrowding, poverty and neglect shown in such prints as “Gin Alley”. The students hope to be able to make their film about this.

We were very proud to be able to award Years 7, 8 and 9 with their Arts Champion badges at a celebration breakfast earlier this month. The Arts Champions are picked from every class in Art, Drama and Music (2 per class). These students will be given extra responsibilities in class, visits and master classes. They will also be used as the face of the arts and represent us at open evening events. The students are relishing their new roles and have already started to take charge of lessons and demonstrations.

On the evening of the 18th November we opened our door to over 200 parents, friends and staff to watch a cast of musicians, dancers and singers perform an evening of Musicals!

The performance was split into 3 parts. The first act was music with bands, violin, piano and flutes, performing pieces from musicals such as West Side Story, Little Shop of Horrors, The Book of Mormon and even an opera. Our head of music Mr Moxon accompanied on the piano.

The second act was dance, choreographed by our Dance teacher Miss Knight. The students performed in large groups and pairs to songs from Chorus Line to Six and Sweet Charity. In total over 40 students took part in this section, making it the largest number we have ever had!

The third act was singing, produced by head of Drama/Arts, Mr Robinson. A cast of 50 students sang songs such as Purple Summer, 17, Send in the Clowns and Seasons of Love.

At the end of the singing section the whole cast, over 70 of them, belted out Food Glorious Food from Oliver, and then ended on a rousing dance interpretation of “The Greatest Show” …and it was!

This was the largest performance (in terms of cast numbers) we have put on, and they performed amazingly.

The audience were asked to donate their ticket price as well as buy cakes, which were made by the cast.

The performance made over £1000. We decided, as a department, to gift this money in the memory of former student and basketball player, Ali.