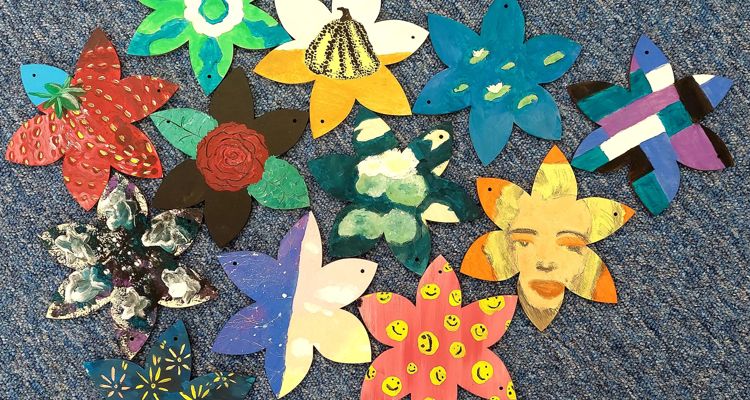 Over the summer holidays the arts department were involved in the two week summer school. During the week the students (upcoming year 7) were given the opportunity to be involved in three projects. The first was to create plastic moths for an upcoming exhibition at the COP21 UN Climate Change conference in Glasgow. The moths were cut out of used milk bottles, and painted; in total we made around 150 which were sent to the Moths to a Flame community arts project. We were then delighted to hear, as a result of our endeavours, that we were rewarded with a "Golden Moth Award" from the community arts group.

At the start of the week the students were visited by a Native American artist who spoke about identity and the struggles of Native Americans to maintain their identity. This lead to the students looking at their own identity. We decided to create our own "identity pole" which included students' stories, hopes and memories.

We covered a carpet roll with cutouts of leaves and flowers, then attached what we called "you tubes". These paper tubes were decorated with the things the students liked doing. We then attached photos and pictures of flags from the students' family homelands. In addition to this the students wrote a memory, first in English and then in their native tongue. The pole, which is the height of the main hall, will be taken to Chiswick House at the start of October for a presentation to the Ambassador of Mexico!

In addition to the great artwork that the students completed, we also put together a dance for the parents to watch on the last day. The dance, appropriately called "We're all in this together" was performed by around 20 students, much to the delight of the parents and teachers.

In all the summer school was a really good chance to show our new students what a vibrant and exciting faculty the Arts are, and it was really clear that they are excited to start.

A new academic year and a new start for the Arts department.

At the start of September the Arts department grew a little to include Art and Performing Arts. To mark this we designed our very own logo! The logo is a combination of the four areas that we now cover, art, dance, drama and music. The logo includes our new motto, "Inspire, Create, Share". These are the three things that we hold closest to our teaching and the three things that the students will be working on in KS3. We also designed the perfect Arts student, which included Creativity, Collaboration, Ambition and Innovation. We hope that every student who leaves us at the end of year 9 will demonstrate these attributes.

We also moved into our new Drama studio, which is already busy with dancing, acting and singing 5 days a week - break times, after school and during lessons.

Our first theatre trip of the year was to the Lyric Theatre in Hammersmith with our year 11 BTEC Performing arts. The production was called "Heart of Hammersmith" and was a vignette style play telling the story of Hammersmith, through the eyes of the local community. The piece was created by the Lyric Community Company which included a Chiswick School student. The visit was a good way for the students to get back into the habit of going to the theatre, after a long spell of absence. The show was well received, and we are looking forward to our next trip!

After school clubs back up and running

At the start of the new term the Arts department started their extensive offer of extracurricular activities. So far we have Choir, Orchestra, Steel Pans, Instrumental, Dance, Arts Clubs, Performing Arts' Singing and Drama.

There's a lot to do, and a lot for the students to be proud of. We are planning now for November, as well as a full programme for Christmas, so keep an eye out for more details.

We were approached by Abundance London to help out with a butterfly installation for Chiswick High Street. They are planning to put up 3000 butterflies in a secret location at the start of October, to coincide with the flower market. Our year 7 students and members of the art club have been busy designing and painting 300 of them.

From flowers to Van Gogh and landscapes to Patrick the Starfish, the flowers and butterflies are sure to be a talking point for months to come.

Over the summer holidays another dark corner of the school was painted with a bright mural.

This time, to coincide with the refurbishment of the 6th form and Drama space, our Head of Arts, Mr Robinson, spent a week with the help of students, painting sunflowers.

The mural is a history of 20th Century Art from Van Gogh to Banksy. The idea is that 17 of the greatest artists all painted "Sunflowers" by Van Gogh, each in their own individual styles.

The wall ends with a quote from Van Gogh stating the importance of trying. We are now eyeing up the next wall!

Music got off to an excellent start at Chiswick. During the first week our A- Level and GCSE cohort headed to the Royal Albert Hall in Central London to watch one of the many BBC Proms concerts this summer. Spanning from July to early September, the BBC proms holds one concert every day for just over 2 months. We were lucky enough to get tickets to Prom 42, featuring Benjamin Grosvenor performing the entirety of Beethoven’s piano concerto from memory, followed by the monumental Organ Symphony of Camille Saint-Saens. Those of you who know the film ‘Babe’ will recognise the finale of the work instantly! James Humphrey in Y11 later said “it’s definitely the best concert I’ve ever been to”.

Two weeks later, on the opposite end of the music spectrum, we were delighted to be able to take our year 9s and 10s to a DJ training session at the local Hogarth Youth Centre. Our students were able to sample state-of-the-art equipment, learn about making their own sets, and even got some practical live experience. Chiswick has always had promising young DJs in its ranks, and this certainly looks set to continue.

We are now in full swing of term, and so many great ensembles have also got off to a flying start. So far we have had our Steel Pan group, Orchestra, Choir, Junior Band, and Senior band all start their first rehearsals, and we all look forward to seeing and hearing them perform in due course.