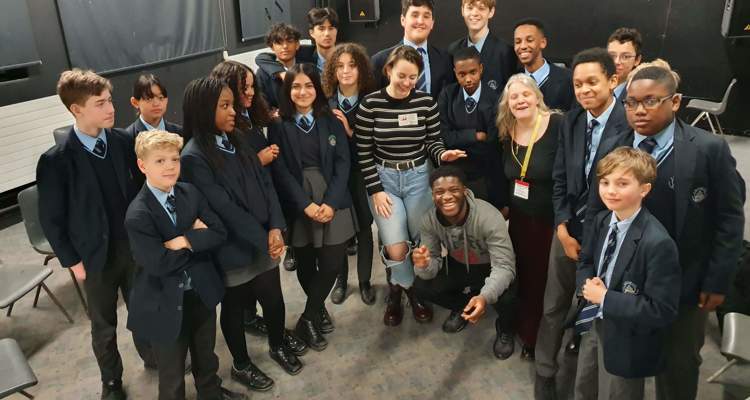 We have been doing a lot of work with the internationally renowned theatre company "Border Crossings". The group devises theatre that challenges our perception of the issues surrounding immigration and refugees. The company offered us three opportunities to work with them (which we gladly took): a series of workshops, a performance and visits from some of the actors involved in the performance.

The first stage - the workshops - were delivered to our Year 9 Performing Arts students and introduced a lot of the themes in the play that the company were producing, and we were going to watch. The group worked extremely hard with the company and gave very intelligent insights into their own feelings surrounding the themes of identity and belonging. The group were also shown the story of indentured workers in Mauritius, and the plight of the mixed-race inhabitants of the island. It was a very powerful workshop, with a lot of debate and creative thinking from the group.

By the end of the first session the group were ready to watch the show.

The second of the workshops was delivered to our EAL students, to allow them to look at where they are from and what their role in worldwide culture is. The students, although not studying Performing Arts themselves, really got involved in the sessions and were able to engage in the practical elements. The sessions were a way of inviting the students to get involved with the company who run workshops and sessions at Battersea Arts Centre,  something we have been offered for free!

The week after the workshops, our Year 9 Performing Arts students went to the theatre!

The performance, called 'The Experiment', was shown at Tara Arts Centre in Enfield. The students knew a lot about the play before they came to the show, so were already prepared. What they were not prepared for were the strong and emotive performances from the cast, who deftly told the story of the Mauritius; this included the slave trade and the way the traders were compensated due to abolition. They sat in silence as members of the cast discovered they were related to slave traders and on-stage discussions took place regarding the complexities of the term "Empire". At the end of the show we left, full of questions and with many strong debates for the train home.

Visit from the Actors

We were very lucky to receive a visit from the actors of the show who came to the school to talk about their profession and the show. The Year 9 Performing Arts students were very surprised, and delighted, to see the actors and were very excited to ask questions.

The actors, Hannah Douglas and Tobi King Bakare, answered questions such as "why did you take this role on?", "what was the strongest part of the production?" and "how did you get into acting?" Each of the answers were listened to carefully and were very well received by the students. Both the actors and the director remarked on how intelligent and thoughtful the questions were and that we should be very proud of our students. We are.

We have been planning a project called "Cherry Tree" for about a month now, and this month we started! The project is a history of Chiswick in performance, based on the stories from our older residents. In collaboration with Age Concern, it is our intention to collect and record as many stories as we can.

We started with a Year 7 group of performing artists attending a coffee morning at the Friendship Club. We arrived at about 1pm and were greeted by many residents all armed with bits of paper and lots of stories. Our students sat with them for an hour and listened to stories about the Second World War, jobs, the streets and what it was like to be a child in Chiswick in the 40s. One resident brought in a big box of old coins and explained the imperial system to our very confused students (who have only known decimal). We were also shown a copy of Chiswick School's very first Newsletter, which didn't have as many photos as this edition!

Web broadcaster, Chiswick Buzz, were also there on the day to film the event, and it will be on their site within the next few weeks, so keep an eye out for that.

The project is still in its first stage; we are returning to the Friendship Centre and visiting other centres soon. We are hoping to have produced a performance by the end of May.