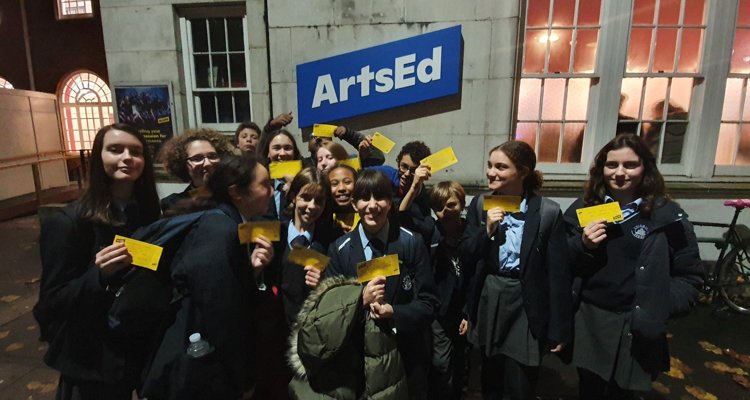 We have been building a partnership with the prestigious Drama School Arts Ed. As part of this partnership they have generously agreed to provide our students with theatre tickets, workshops and advice for our Performing Arts.

The first such event took place this week with two groups of students attending the theatre to watch the final year BA students perform a double-header. The two plays 'Loving George' and 'Saving Rachel' were both well received by the students, most of whom had never been to the theatre before. The experience for them was described by one of the students as "Amazing, far better than watching TV. It was brilliant to watch real actors on stage; it felt so real". The students also met with the Head of Acting at the College who gave advice on how to get to Drama School, what types of plays to engage in and the importance of Shakespeare!

For the past 6 weeks a small but dedicated cast have given up their time after school and on weekends, to bring the Shakespeare Schools Festival an atmospheric and intense interpretation of Othello.

On the day of the performance the cast gathered at school and spent the morning rehearsing and bonding. Nerves and emotions were high, but also confidence. They had rehearsed harder than they have ever done before and they were ready. Shirts were ironed, shoes polished and the last of the sewing was being finished.On the train to the venue the cast sat uncharacteristically quietly, thinking of the task ahead. Once at the theatre, and after a long technical rehearsal they were ready for the full dress rehearsal. The lights darkened and the music kicked in... it was amazing! The cast pulled out of the bag one of the best performances of their lives, and blew away the gathered audience of other schools performing that day.

After a short break for food and drink, it was back to the theatre for the night's performance. A packed house of teachers, parents and friends sat in anticipation. Once again the cast marched onto the stage, stood motionless and waited for the music to kick in. To a thumping bass line they stamped their presence as one, turned and glared at the surprised and shocked audience as Othello broke the neck of an unfortunate victim.

The performance drove forward the themes of fear, jealousy, death and love, and, with each turn, the audience sat with wide-eyed amazement at the sheer talent of this young and relatively inexperienced cast. Their slick, smooth and sophisticated moves from one scene to the next echoed the inexorable descent into the tragedy that was to come. Othello finally, with a broken voice, plunged his dagger into his heart after smothering and beating his beloved wife to death in a scene that both shocked and moved the audience. The final black out, and the casts curtain call, was greeted by a rapturous and well-deserved applause. And as they left the stage, still holding their focus, they knew they had been the very best anyone could be.

The performance was reviewed by parents and teachers alike with comments such as "powerful, slick, professional and extremely focused". This was the first of the new Chiswick Performing Arts and, if this is any indication of what is to come, it's going to be very exciting!

It's going to be a fun-packed Christmas from the Performing Arts this year. We are currently rehearing four performances. From a pantomime for our primary schools to a Medieval-style Nativity pageant. We are also producing a "Sing-along Christmas evening" with all the favourites on offer, including modern and traditional. Our main event however will be our Christmas show, The Grinch! Rehearsals for this have been rattling along for the past 3 weeks and the cast are almost ready to go with an evening of dance and, we hope, laughter! The play is an adaptation, written by Mr. Robinson, of the Dr Seuss Christmas favourite and promises to be a great evening. Tickets are available on the door at £3 each, and free for under 10s.